Help or Hype? Organic or grass-fed meat and poultry are safer than their conventional supermarket counterparts

I’m not sure which holiday is the biggest one for eating meat in the US, but my guess is that Independence Day ranks near the top. So with July 4th falling during this week, I was not surprised to see scary headlines about the dangers of eating conventionally produced meat. I’m pretty skeptical about this type of seasonal food hysteria, like the springtime warnings about “dirty” fruits and vegetables – read my Produce Business article here – so my antennae went up when a headline about “superbugs” in supermarket meat caught my eye. The article suggested avoiding conventionally raised meat and instead buying meat labeled “organic,” “grassfed,” or “no antibiotic residues.” I wasn’t convinced that the advice was correct and based on science. 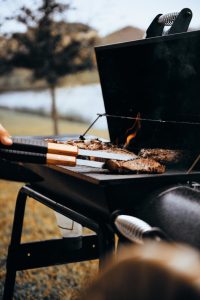 Then, a close friend contracted a particularly virulent case of E.coli from eating a restaurant meal, and that made the topic of food safety even more real for me. So I decided to dig my journalist fork into questions regarding the safety of conventional versus organic meat, and here is what I learned.

Does all meat have potentially dangerous bacteria?

Yes. The most common pathogenic bacteria in meat and poultry, namely Salmonella, Campylobacter, E. coli and Enterococcus, are present in the intestinal tract of feed animals and are present in both conventional and organic retail meat. Organic is just as likely as conventional to carry bacteria. In fact, studies comparing grass-fed to conventionally raised retail beef products and conventional to antibiotic-free and organic chicken breasts sold at retail find no significant difference in bacteria counts.

Here is some good news: bacterial counts are declining or steady in retail chicken, pork chops, ground turkey and ground meat, according to the 2015 National Antimicrobial Resistance Monitoring System (NARMS) report, a collaboration among the US Food and Drug Administration (FDA), US Department of Agriculture (USDA), Centers for Disease Control and Prevention (CDC), and local and state health departments. NARMS tracks changes in the antimicrobial susceptibility of enteric (intestinal) bacteria found in ill people (CDC), retail meats (FDA), and food animals (USDA) in the United States. The NARMS program provides information about emerging bacterial resistance, how resistant infections differ from susceptible infections, and the impact of interventions designed to limit the spread of resistance. NARMS data are used by FDA to make regulatory decisions designed to preserve the effectiveness of antibiotics for humans and animals. NARMS reports show that the most concerning bacteria have declined steadily for more than a decade.

Some of the potentially harmful bacteria in meat and poultry have evolved to resist certain antibiotics that are used to treat conventionally raised farm animals. A human infection caused by an antibiotic-resistant strain may be harder to treat, depending on which antibiotics the strain responds to. Meat is not the only potential source of antibiotic-resistant bacterial strains. They can come from other foods and also can develop in humans who have been treated with antibiotics. Also, by nature, many bacteria are resistant to at least one antibiotic, but can easily be treated with other antibiotics.

I turned to my colleagues at the North American Meat Institute (NAMI), the oldest and largest trade association representing U.S. packers and processors of beef, pork, lamb, veal and turkey, for additional information. (Disclosure: I have attended programs sponsored by NAMI) NAMI offers a series of answers to common myths about meat, including answers regarding superbugs, that is, bacteria resistant to all bacteria. NAMI points out that the objective of meat and poultry processors is to eliminate pathogenic bacteria on products before they are consumed. Reports show that resistance to important antibiotics used in human medicine remains low.

In 2017, the FDA implemented new recommendations to limit use of antibiotics in feed animals to those necessary for animal health and overseen by a veterinarian. Antimicrobials no longer are permitted for growth promotion and improved feed efficiency. I learned from the National Pork Board that pig farmers and other livestock farmers follow the FDA regulations, including withdrawal times, to ensure that retail meat has no antibiotic residues. This will reduce the prevalence over time of animals in the food supply harboring antibiotic-resistant bacteria.

What is the bottom line?

NAMI reassures consumers that they should feel confident about the meat and poultry they eat, which are safer than ever. The choice of conventional or organic is up to you. BUT MOST IMPORTANTLY, you can reduce the risk of contracting a foodborne illness from meat or poultry, conventional or organic, and from bacteria, antibiotic-resistant or not, through proper food handling. Charts from the CDC, including the grilled chart below, summarize key measures: separate raw meat and poultry from other items in the grocery cart and refrigerator, keep cool at temperatures below 40°F until ready to cook, clean hands, work surfaces and utensils, and cook to the proper temperature. Cooking to an internal temperature of at least 140°F kills all types of bacteria.